Published by Kabaty Press
Impressions of America is my translation of the second edition of Wrażenia z Ameryki by Konstanty Buszczyński (1856–1921). In 1910 and 1912 the author  travelled around the United States to find suitable sites for seed development trials. The research at sites in California and Utah helped his  company develop leaf spot resistant sugar beet seeds and gain export markets around the world. However Buszczyński was interested in far more than just business and wrote many letters recording his impressions of America, which he later compiled into a book published in Kraków in 1916.
​After the end of World War I, Buszczyński travelled to America yet again — this time as Consul General to set up a consulate in New York for the newly independent Polish state.
​He expanded his book adding a preface with his views on America’s role in World War I, an outline history of the USA, and his views about some fundamental differences in the development of European and American society. This expanded second edition was published posthumously in 1922. 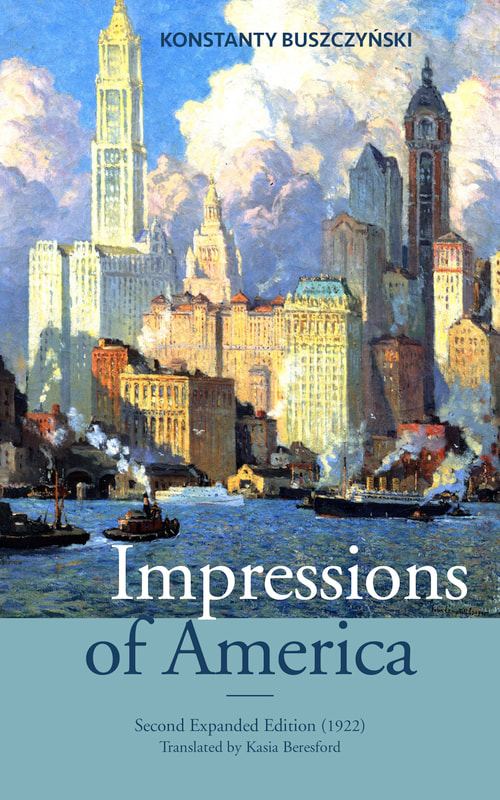 Cover design by Nikki Ellis
Impressions of America is a wide-ranging survey of American society and its mores, politics, economics and history. Buszczyński covers numerous topics from the world of work to religion, from Tadeusz Kościuszko and his memorial in New York to the travails of Mormon pioneers, from the life and aspirations of the Polish diaspora in America to an anecdote about an elegant, well-to-do Parisian lady being deemed unsuitable to stay on American soil.
What is striking throughout is how impressed the author was by the drive, pragmatism and freshness of American society. Clearly for him the contrast to more rigid, traditional societal norms in Europe was stark. In America he observed an emphasis on a person’s current behaviour and their potential rather than focusing on their past. He saw they valued freedom rather than restrictive rules and practices. He was amazed by Americans’ eagerness to help,  particularly when this attitude was displayed by officials in public institutions.
Many subjects covered in the book e.g. Niagara Falls,  Yellowstone National Park, sequoias, the Californian gold rush, the American landscapes described, may well be familiar, but the period and perspective is different to ours. The author was a well educated landowner, an enterprising businessman and an inquisitive traveller who wanted to find out as much as he could about America. In the book he compares his impressions with Europe as he knew it. Frequently the subjects he chooses to remark on, e.g. children’s playgrounds, reveal the innovations that had not yet become widespread back at home.
I was particularly charmed by his description of  camping:

Americans’ great love of nature has resulted in a custom whereby in the summertime a great many families go away to the mountains or prairies for a few weeks, often taking a tent or a wagon to lead a nomadic life in nature’s bosom (this is called “camping”). It is absolutely safe and weapons are superfluous.

If you wish to be transported into a world where the author looks with fresh eyes on things which are commonplace now the book is available at https://www.kabatypress.com/books and at major online booksellers.

I would like to thank Isobelle of Kabaty Press who has been a perspicacious editor and a pleasure to work with.
Thank you to Margot Sobieroj for her assistance with some background information in the German language and to Ania, Ela, Alicja, Iwona and Ania from my local Polish book club for patiently listening to me agonising over minutiae in the text and contributing their varied interpretations to my thought process.
Finally I would like to express my appreciation for POLONA  - https://polona.pl/  - the portal of The National Library of Poland, which was invaluable. I was able to access digital resources containing useful background information e.g. the 1916 edition of the book e.g. a publication containing a history of Buszczyński’s seed development and production business K. Buszczyński i Synowie Hodowla Nasion 1886 -1936 .